THE DAY MAY BREAK

The Day May Break, photographed in Zimbabwe and Kenya late 2020 and in Bolivia in March 2022 are the first parts of a global series portraying people and animals impacted by environmental degradation and destruction.

The people are badly affected by climate change – some displaced by cyclones that destroyed their homes, others such as farmers displaced and impoverished by years-long severe droughts.

The photographs were taken at sanctuaries/conservancies. The animals are almost all long-term rescues, victims of everything from the poaching of their parents to habitat destruction and poisoning. These animals can never be released back into the wild. As a result, they are habituated, and so it was safe for human strangers to be close to them, photographed together in the same frame. The fog is the unifying visual. We increasingly find ourselves in a kind of limbo, a once-recognizable world now fading from view. The fog, created by fog machines on location, acts an echo of the suffocating smoke from the wildfires, driven by climate change, devastating so much of the planet. However, in spite of their loss, these people and animals are the survivors. And therein lies possibility and hope.

The exhibition at our GTF is powered by mpb and organised in collaboration with Jaeger Art. 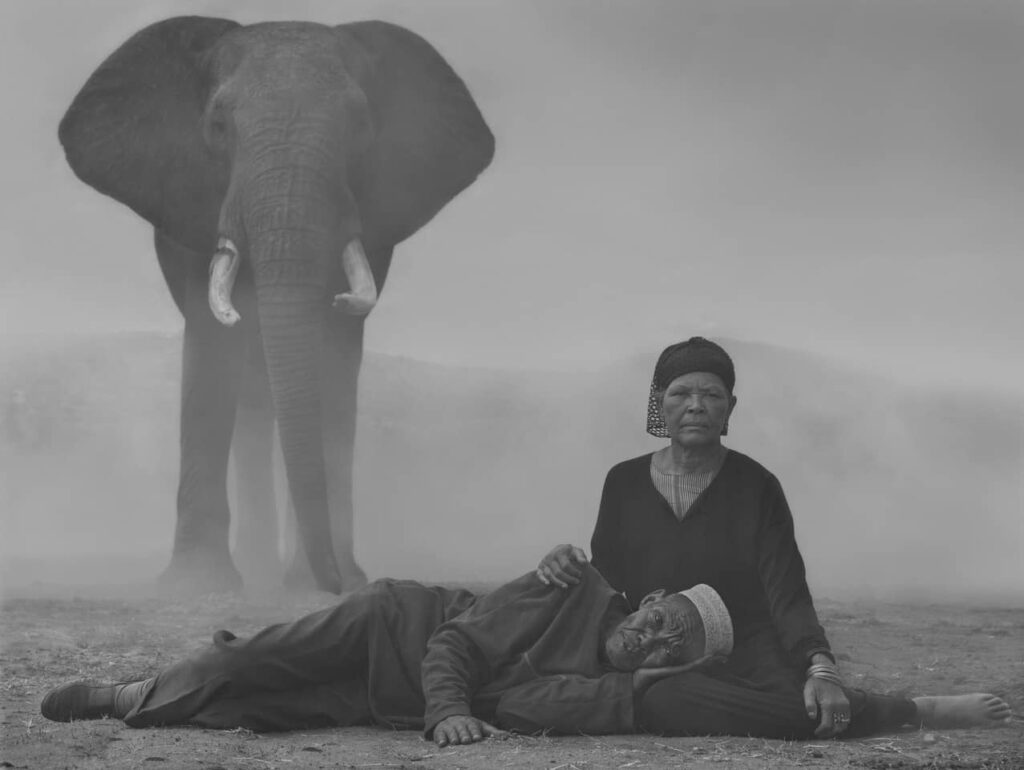 Ali and Fatuma originally lived as nomads with their livestock in northeastern Kenya. But starting in 2010, extended severe droughts killed all their goats and cows. It got to the point where they had no food and little clothing. Everyone fled wherever they could; a lot of people died. Ali and Fatuma were forced to move to a town further south. They are still not able to go back home. Bupa was nine years old in 1989 when he was rescued from a mass elephant cull in Zimbabwe by the owner of Ol Jogi Conservancy. Bupa’s parents would have been killed in the culling. Once upon a time, there would have been no such thing as an “excess population” of elephants, because there would have been enough land for them to roam and migrate. But with habitat loss and destruction, and human encroachment, there is less and less land for viable habitat. This forces elephants into the remaining uninhabited areas, resulting in severely damaged woodlands from overgrazing. And then the culling begins. Photographed at Ol Jogi Conservancy, Kenya, October 2020.

James used to own a five-acre farm in central Kenya. He was successful and “life was good.” But years of long droughts made making a living harder and harder, until 2015, when bankrupt, he was forced to move and look for a job of any kind. This formerly proud, independent farmer has been reduced by climate change to being a casual laborer in the county market.

Fatu is one of the last two northern white rhinos in the world, living at Ol Pejeta Conservancy under 24/7 are security. When Fatu and her mother Najin die, the species will be extinct.
Once upon a time, the northern white rhino’s range extended through central Africa. But decades of poaching have taken its toll. And this is the tragically inevitable conclusion.
Complex in vitro fertilization procedures—never before attempted in rhinos—are conducted several times each year in a final attempt to keep the species from going extinct. 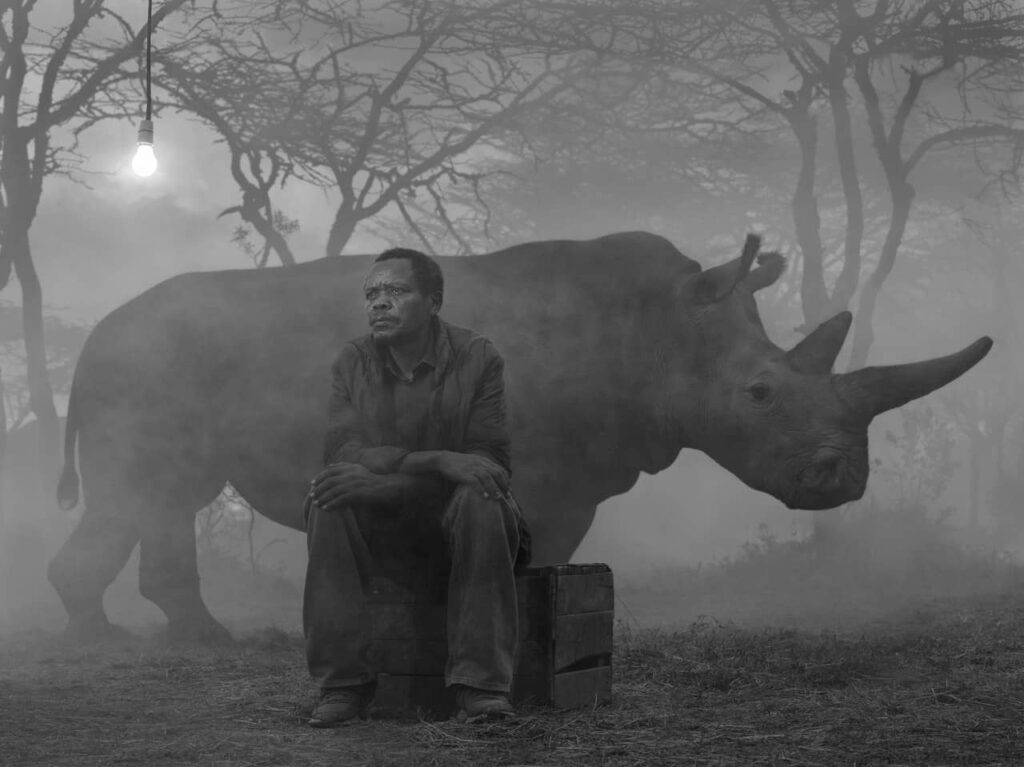 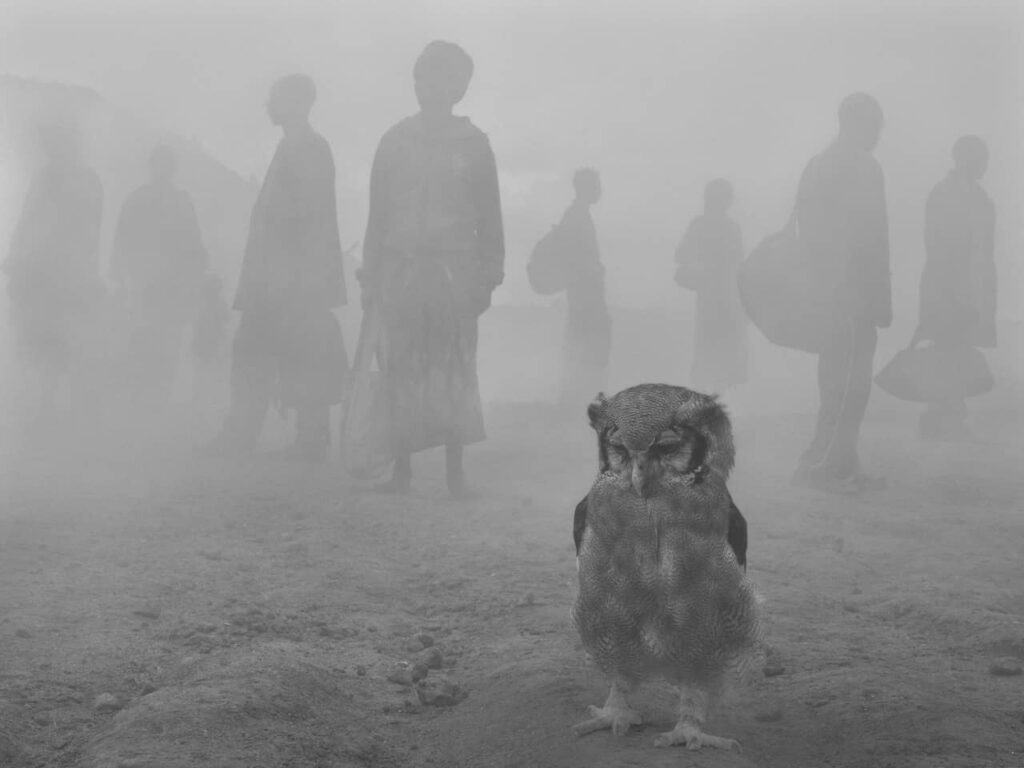 Harriet and people in fog

Harriet, a giant eagle owl, has lived at Kuimba Shiri Burd Sanctuary for 35 years, rescued when she just a chick as a result of deforestation. As with many of the birds rescued by Kuimba Shiri as chicks, she would not survive if reintroduced into the wild.

Giant eagle owls (also known as Verraux’s Owl) are actually widespread across sub-Saharan Africa, although perhaps declining in rural areas due to deforestation.

Halima and her husband lived in northeastern Kenya, where they raised livestock including camels. After 5-6 years with only one rainy season, the drought in 2013 was especially bad. The wells dried up. Not only did the cows and goats die, but even their camels died. The government would provide relief food once a year, but it was not enough on which to depend.

Halima’s husband left her, and so she and her children had to move south to Nanyuki. She is now forced to do menial jobs to raise her kids.

In 2018, Frida, a greater kudu, was found when very young at the entrance gate of Ol Jogi Conservancy. There is a high possibility that her mother was killed by some hunters, a victim of the illegal bushmeat trade.

Kudu are declining in population across areas of sub-Saharan Africa due to illegal bushmeat poaching, habitat loss, and deforestation. 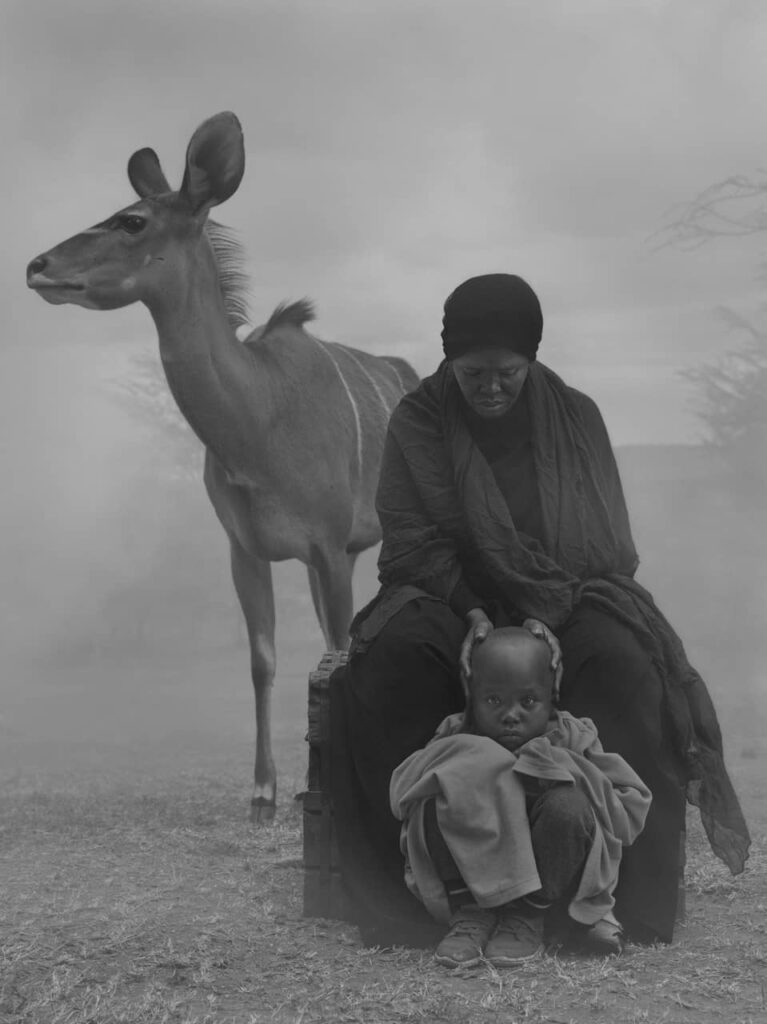 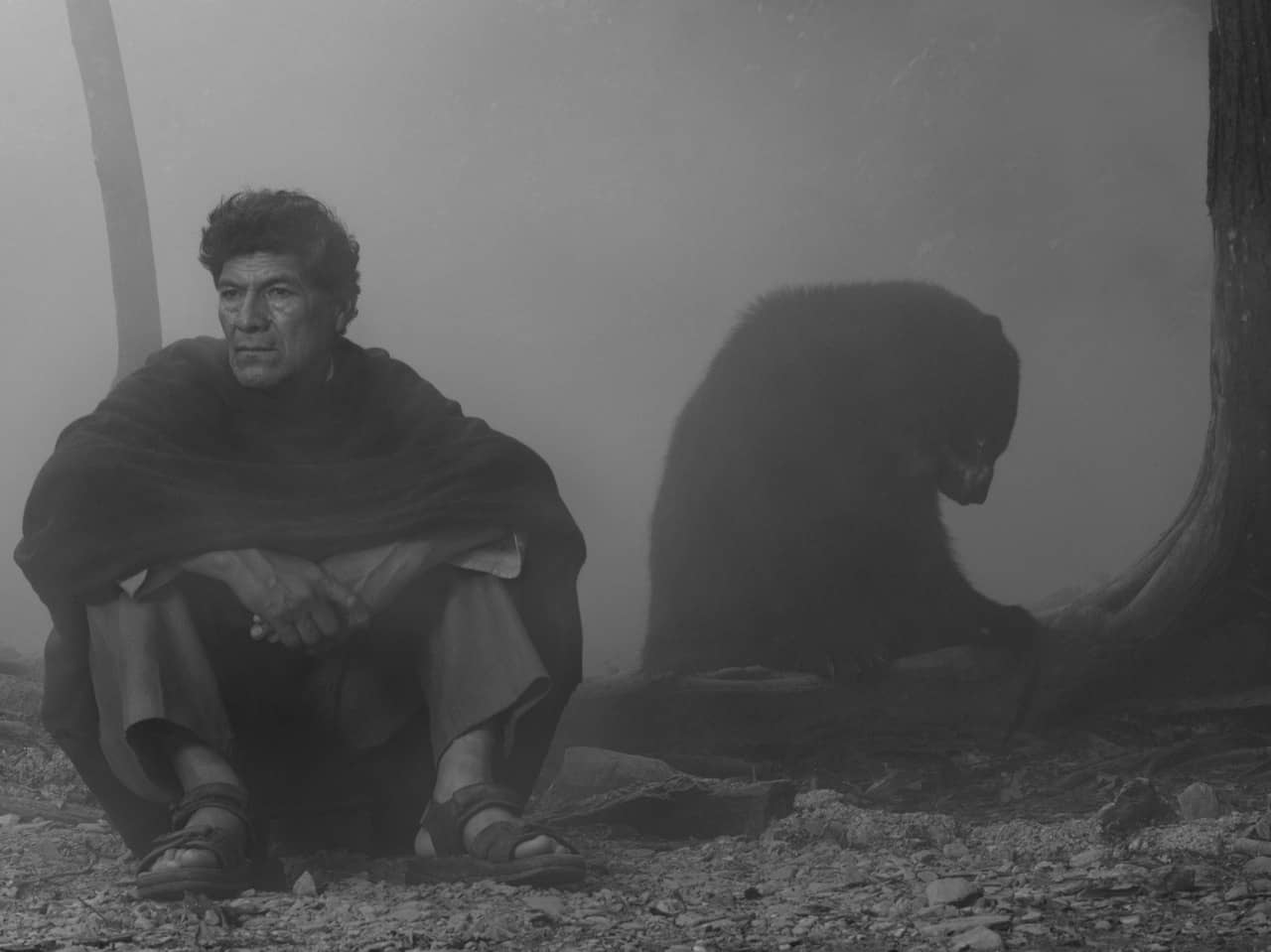 In 2021, floods on a scale never before seen in the area where Lucio lives, swept away everything in its path. Lucio, a farmer who lives with his wife and daughter, lost all his crops. More than half of his land is now useless for planting, covered with stones, sand and mud.

Lucio, like many in the community, had everything invested in his crops. He is trying to persuade the local authorities that a retaining wall be built along the river, but if this doesn’t happen, he is pessimistic that the community can recover. Tarkus was rescued as a 3 month old baby by the side of the road. His mother had been killed.

Tarkus, now aged three, now lives in a large hilly and forested enclosure at Senda Verde Animal Refuge. During the shoot, a single electrified wire kept him safely separated from human, something he recognizes, as his enclosure has an electrified fence.

Andean bears are the only surviving species of bear in South America, with only an estimated 2000-2500 left on the entire continent.

There are multiple reasons for this : deforestation for timber and illicit crops such as coca (I saw large areas of even ‘protected’ national park in Bolivia deforested in this way); grazing areas for cattle farming; road construction; and mining. Complicating matters, protected areas, and some of the bear populations, are not large enough for the species’ survival throughout its range. Estimates put bear habitat loss at up to 4% a year.

Although protected by international trade laws, Andean bears are still illegally hunted for their meat and body parts in wildlife trade. The gall bladders are much sought after in China and fetch high prices, as do the bears’ paws. 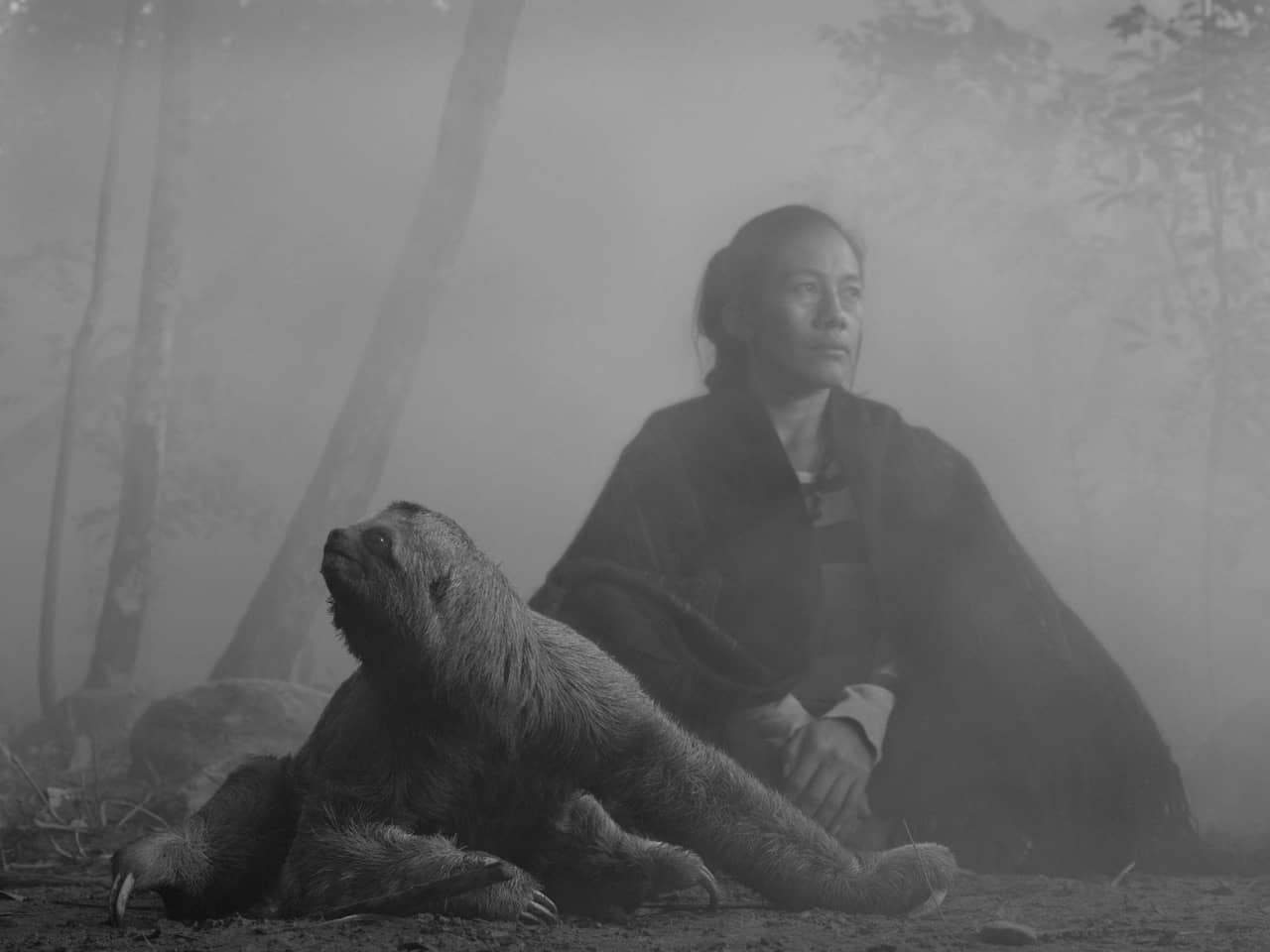 Zosa, a three-toed sloth, perhaps 8 months old when she was photographed here. She was confiscated by police from a restaurant in 2021. Along with many other animals, she was kept there to attract customers, after being bought as a baby in a nearby market town. Like so many other animals, her mother was killed.

Zosa was rescued by Senda Verde Animal Refuge, where she now lives safely in the forest there.

Because sloths are the slowest-moving mammal in the world, these astonishing, gentle creatures increasingly meet terrible deaths. As more and more of the Amazon is is destroyed by fires started by man, the sloths are too slow to be able to escape. When the trees they inhabit in the forest are chopped down, they come crashing down with the trees. Countless others are run over.

In 2014, the heavy rains came to Ruth’s region and did not stop for several weeks. The river close to her house burst its banks and rose to such a degree that it reached the roof. Ruth was only able to save a few things. Water and mudslides destroyed and damaged more than 60,000 homes. Many lives were lost, and many lost their livelihoods. About 150,000 cattle also died, as well as countless wild animals.
Ruth, pregnant at the time, was moved to tents for the displaced. Now a single mother, she who works to support her children. The worst flood in 60 years, the level of destruction was caused not just by climate change, but also by deforestation on mountainsides, creating increased run-off into the already swollen rivers.